Recognizing the 9 Signs of Cushing’s Disease

You’ve heard it time and time again- “my horse has cushings”. This seems like something every horse develops when entering his golden years and while it may not happen to every horse, it happens to a fair amount of them. Keep reading to learn what Cushings is, and what to look out for regarding it.

The most common endocrine disorder affecting the senior horse is pituitary pars intermedia dysfunction or PPID due to hyperplasia (increased cell growth) of part of the pituitary gland. This is sometimes referred to as a pituitary tumor or the clinical condition is called "Cushing's Disease." Although aged horses tend to develop adenomas (benign tumors) of the thyroid gland, these are nearly always nonfunctional, requiring no attention unless their size causes problems, such as with swallowing.

Despite the fact that not every horse with this condition will exhibit the "classic" signs of the disease, certain changes are considered to be hallmarks:

The "classic" case probably does not require testing to confirm pituitary dysfunction, but the less obvious cases do. Various blood tests may be performed but routine hematology and serum biochemistry panels are not diagnostic of the condition. Because of variability in serum or plasma concentrations of ACTH when it is above reference range, single baseline measurements may not be very useful in the diagnosis of this disease unless a value is extremely elevated; it is advisable to obtain more than one blood sample for testing.

Plasma concentrations of ACTH that are consistently increased above reference range during months other than mid-August through October are strong evidence that a horse has PPID. Season influences hormone concentrations (ACTH), and normal horses and ponies sometimes have high concentrations during mid Aug through October, making it preferable to test during other times of the year when possible. However, normal basal levels of these hormones do not rule out PPID, and in these cases, it is helpful to have your veterinarian perform stimulation tests to determine whether there is an abnormal rise in ACTH. ACTH is currently the most frequently measured hormone.

Measuring the horse’s baseline cortisol levels is not as helpful because horses with PPID often have low or normal, not increased, concentrations. Also, obtaining a blood sample in the morning and one in the afternoon or evening to evaluate whether there is daily variation of the cortisol concentration is not reliable as many factors can influence the levels. Failure to detect a difference between morning and afternoon or evening levels does not mean the horse has PPID.

Pergolide (Prascend) appears to be the best treatment, although not all animals respond to the same dosage. Excellent husbandry, including frequent teeth care is very important. These horses also may require more aggressive parasite prevention programs.

Is your horse showing signs of Cushings? Give us a call to schedule an appointment to have him checked. We are open 8-5, Monday through Friday. 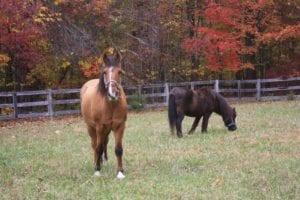