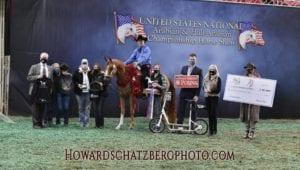 In our ongoing series to provide stories of different horse profiles, the care they've been given, and how they are thriving in their environment, we would like to introduce Girl Crush. 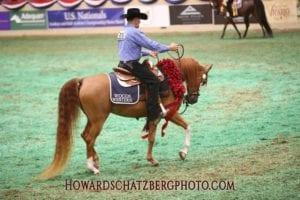 Girl Crush is a beautiful chestnut Arabian mare that has a large team behind her. Keep reading to learn more about this beauty’s story.

Girl Crush was bred by Melessa Jenkins who is from Ohio.  She bought a breeding to RGT Mozart who is owned by Janice and Neville Lorick and was bred by Rick and Laura Gault.  Melessa then bred RGT Mozart "Duke" to a beautiful chestnut arabian mare named Verset.  The outcome was a perfect chestnut filly she named Girl Crush.  Janice Lorick and Laura Gault liked her so much that they purchased her from Melessa at the young age of 5 months. She grew up with all the other babies at Rick Gault Training and came in to start her western pleasure training as a late 2-year old.

Rick Gault  prepared her to compete in the 2019 US Arabian National Futurities in Western Pleasure and she was flawless and ready to go.  The Gaults turned her out in a small paddock a few weeks before the show and when they went to bring her in she was standing on 3 legs and not able to put weight on her left hind at all. While it was unclear the reason behind this injury, It is believed she was running and playing and slammed on brakes and slid, causing a bone chip in her hock.

The doctors at CEH did lots of work with her and consulted with a surgeon at Virginia Tech and determined it was not a good idea to operate.  She was unable to compete at that show and it was pretty definite she would never compete again. The Gaults were hoping she would be sound enough to be comfortable as a broodmare.  Dr. Wallace and Dr. Boyer worked with Girl Crush and performed several injections. Girl Crush was put on stall rest and she later graduated to a small turnout paddock.  Her team had pretty much given up on the fact she would ever hit the show ring.

As time progressed, it appeared that Girl Crush was improving and making an incredible recovery. Rick made the decision to ask Dr. Boyer to look at her and she couldn't believe that she was totally sound after flexion tests.  She said “let's start her back slow and see what happens”.  From there it is history!  In 2020, Rick showed her at both Region 15 in Lexington, VA and Region 13 in Wilmington, OH and she won the Arabian Western Pleasure Junior horse classes unanimously under 6 different judges.  In October Rick took her to the US Nationals in Tulsa, OK and showed her in the big prize money class for 4 year old purebred Arabian horses (the class is put on by the Arabian Western Pleasure Association. 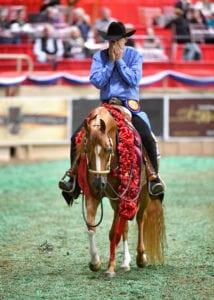 There were approximately 45 horses in the class from all over the country and the competition was incredible.  It was the biggest surprise and personal achievement for everyone, including Rick, Janice and Laura, and all the vets involved!  She won tons of prizes and recognition including $35,000, 1 ton of Purina feed, a Razor scooter, a silver belt buckle made by "A Cut Above Buckles", and a gift certificate from Perfect Products.

Most importantly she is healthy and continuing to do well and we look forward to what the future holds for her.  She is such a sweet and talented mare with a heart of gold!